We recently received this photo from Max Elder's son (bottom left corner),if anyone can assist in naming any of these gentleman it will be much appreciated
2021 Subscriptions:
Subscriptions remain unchanged at R75 for the year 1 January 2021 to 31 December 2021.
Please pay, preferably by direct deposit at any Nedbank or by EFT into the RAFOC account. Please include your name as the reference.
NEDBANK MELROSE ARCH BRANCH 19 66 05 ACCOUNT 1966 278 063
RAFOC Member - Selwyn “Scully” Levin honoured 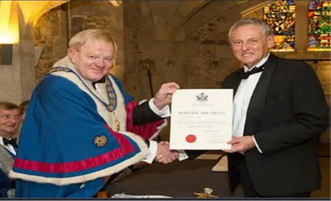 Selwyn “Scully” Levin, a longstanding RAFOC member, was recently honoured by the Honourable Company of Air Pilots by awarding him the Master Air Pilot Certificate. The honour is only bestowed on very select pilots who have demonstrated a long and distinguished career as a pilot and who have made a major contribution to aviation world-wide, whether civil or military.
From the HCAP Website https://www.airpilots.org/ the following is quoted :
THE HONOURABLE COMPANY OF AIR PILOTS
‘The Air Pilots’ was established as the Guild of Air Pilots and Air Navigators in 1929. It is based in London but has an internationally based membership of professional and private pilots. The principal activities of the organisation are centred on developing action and activities to ensure that aircraft are piloted and navigated safely by aviators who are highly competent, self-reliant, dependable and respected.
Master Air Pilot/Master Air Navigator Certificates
The award of this certificate, signed by the Grand Master, is an honour to a pilot or navigator, not necessarily a member of the Company, who has in the opinion of the Court displayed over a number of years those qualities of pilotage, air navigation, airmanship and character which have brought honour and respect to the profession. The award is in recognition of long service and consistently high standards in one or more branches of professional flying, whether civil or military, including air transport, flying instruction, test or operational flying. As the title suggests, the recipient will be a proven Master of their craft.
Biography
Captain Selwyn “Scully” Levin was born in Pietersburg, Transvaal (now Polokwane, Limpopo) on 29 September 1946. He began his flying career in 1964 and graduated as the top pupil pilot on his course. He joined South African Airways (SAA) in 1971 as a second officer on the Boeing 707 and rose through the ranks until he became the airline’s chief training captain.
From the beginning to the end of his career, Captain Levin showed great enthusiasm and distinction in his work. Over the past 48 years, he has amassed 26 500 hours of flight time on over 180 different types of aircraft – an equivalent to almost three years of continuous flight in the air, a record rarely paralleled around the world.
In 1995, he was the first African to participate in the annual National Air Racing Championships at Reno in the United States of America where he won both the races that he competed in. In addition, Captain Levin has flown as a member of the giant airliner three-ship formations that SAA put into the sky over the Union Buildings for the inauguration of South African presidents in 1999, 2004 and 2009, and also for the World Cup Cricket Final and the Star Alliance Launch in 2006.
As one of the country’s famous pilots, during his career, Captain Levin brought worldwide recognition and acclaim to South African aviation in general, and to SAA in particular, mastering a diverse array of aircraft to the point of displaying them at air shows.
Captain Levin commanded aircraft on all of SAA’s local, regional and international routes for over 38 years. He is admired by millions of aviation enthusiasts and fellow airline crew, as well as air-show pilots locally and abroad. He has worked and collaborated on numerous publications covering display flying, aerobatics and flight safety.
During the 1970s, he was a three-time winner of the South African National Aerobatic Champion title. Other honors include the Don Tilley Award for significant contributions to air safety, which he received in 1984 and the Pilot of the Year Award made by the Commercial Aviation Association of Southern Africa.
Most notably, Captain Levin is the sole winner so far, of the SA Flyer “Lifetime Aviation Achievement Award”, which he received in 2009. He is a designated examiner for the South African Civil Aviation Authority (SACAA), and the holder of a Class 2 Test Pilot’s Rating. He served as a member of the SACAA’s General Aviation Safety Initiative, which was set up to design strategic measures to improve flight safety in South Africa.
Since his retirement from SAA, Scully has continued to make a valuable contribution to the South African airline industry as consultant and display pilot. In 2012 he was awarded the Order of the Baobab in Bronze form the Republic of South Africa.
Source : http://www.thepresidency.gov.za

No part of this website may be reproduced, copied, stored, manipulated in any retrieval system or be transmitted in any electronic, digital, or hardcopy format or any other means without the express prior written permission of the Royal Air Force Officers' Club, Johannesburg.

Every effort has been made to ensure that any illustrations and text used have been sourced from the public domain and/or from Members, and are free of copyright. Should there be any instance to the contrary, the Royal Air Force Officers' Club, Johannesburg, offers sincere apologies, and will make appropriate acknowledgement.